For all of his hard work attending school and graduating as a German Chemist, while participating in the Tour de France in the 60’s, Manfred Donike was most widely known as an “doping expert” and is credited with the first accurate urine testing procedures.

He was Director for the Institute for Biochemistry at the German Sports University Cologne and head of drug testing operations at the 1972 Munich Olympics.

Manfred Donike, at 61 years old, suffered a major heart attack and died in flight to Johannesburg to set up a drug testing lab for the All-African Games in August of 1995.

At the time of his death, Dr. Don Catlin, head of the Paul Ziffrin Analytical Laboratory at UCLA stated:

“He devised all the chemical methods of identifying prohibited substances.  This is a staggering blow (to the anti-doping movement), but we will recover…”LINK

The first thing I saw on google January 3rd,  while browsing the news was an article at the Daily Beast written by Christopher Moraff.

I had to look two or three times with my glasses on just to make sure of what I was seeing.  I checked to see if it was a spoof – and it is not – as it is being reported by a number of news sites.

I immediately thought to myself, “I wonder if Manfred Donike knew what would happen when he came up with the procedure for drug-testing?”  Did he have any idea that this testing would be used to imprison people throughout the World?  Did he know how many Children would be separated from their Parents for nominal use of any substance that the Government saw fit to deem illicit?  Did he know how many people would go to jail or prison or possibly a mental health facility for smoking Marijuana?

Then, on January 4th we wake up to this news!

Manfred Donike was appointed director of the Institute of Biochemistry at the German Sport University in Cologne in 1977, he is THE man who was responsible for the development of drug testing which is still used today.

Single handedly he is responsible for more people being imprisoned or confined in facilities for drug use than any other person on Earth.   Whether or not he realized at the time what would happen we will probably never know.   Continuing long after his death the long arm of drug testing has nestled into every Country on the face of the planet and threatens to control all of Society at large for a long time to come…

Dr. Robert Dupont formerly of NIDA, Kevin Sabet of Smart Approaches to Marijuana (SAM), and several other notable anti-legalization Activists joined Mr. Sessions in a meeting to discuss the situation regarding the many States who have “legalized” Marijuana in December.

“I think it’s a big issue for America, for the country, and I’m of the general view that this is not a healthy substance,”  USAG Jeff Sessions  LINK       VIDEO LINK

As the meeting was closed-door there was no initial reports except to the fact that it did take place.  Mr. Sessions said this about the meeting…

We’re working on that very hard right now,” he said on Wednesday. “We had meetings yesterday and talked about it at some length. It’s my view that the use of marijuana is detrimental and we should not give encouragement in any way to it. And it represents a federal violation which is in the law and is subject to being enforced, and our priorities will have to be focused on all the things and challenges that we face.”(USAG Sessions) LINK

As of this morning, we know what he decided to do!  The “COLE MEMO” will be rescinded.

(CNN)In a seismic shift, Attorney General Jeff Sessions will announce Thursday that he is rescinding a trio of memos from the Obama administration that adopted a policy of non-interference with marijuana-friendly state laws, according to a source with knowledge of the decision. LINK

If anyone thinks that it is not feasible for the Federal Government to drug-test everyone, they would be wrong.  The health-care system is set up as a monitoring system.  At some point everyone will have to see a doctor for illness.

A national model bill Dr. DuPont wrote in 2010 called for testing  anyone stopped for suspicion of DUI for all controlled substances, and arresting them if any trace amount at all is detected.

“Doctors already check for things like cholesterol and blood sugar, why not test for illicit drugs.”

Ultimately, it will all lead you back to Agenda 21/30.  The total control of the people through the food and medicine (and plants) you consume.  Add to that drug testing at your local PCP and the NWO has us rounded up pretty well.

The principle of fair play forbids saying someone is guilty without evidence.”

Therefore, we MUST have evidence.  And what better way to have the evidence at hand than to routinely urine test every citizen  as part of our healthcare, as a way to keep us free from addiction?  Not to mention the fact that it is all conveniently entered into a computerized health care system for easy access by any Federal entity that is deemed appropriate at the time.  Sounds like a great plan to me…(!!) if I were interested in maintaining total control over the population and keeping the prison industrial complex flowing…

Additionally, there was an article written by R. William Davis, entitled “Shadow of the Swastika – The Elkhorn Manifesto” which outlines the historical avenues which were taken to get us where we are at today.  Today, on the anniversary of Gatewood Galbraith’s death I invite you to take a look at it.  It is a very interesting and informative read.

After the morning news today there isn’t much more to be said about what is happening unless they literally declare martial law across the Nation just to control the potheads.

I can’t wait for the new “memo” to come out!

“Rights and freedoms may in no case be exercised contrary to purposes and principles of the United Nations.” HOW THE UNITED NATIONS IS STEALING OUR “UNALIENABLE RIGHTS” TO GROW FOOD AND MEDICINE THROUGH THE U.N. CONVENTION ON NARCOTIC DRUGS AND AGENDA 21. 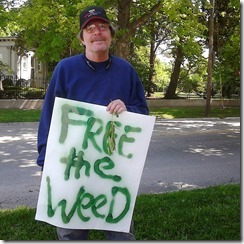